END_OF_DOCUMENT_TOKEN_TO_BE_REPLACED

The members of the 603 Alliance, who pledged that they would support and campaign for whomever was the victor in the Grassroots Caucus, have officially endorsed Senator Cruz, unanimously.

Over 700 grassroots activists turned out for this first-ever New Hampshire Caucus that was organized by the 603 Alliance. This Caucus was designed to give grassroots activists a chance to make their voices heard; and they did so quite clearly at the Durgin Arena at the Hopkinton Fairgrounds.
END_OF_DOCUMENT_TOKEN_TO_BE_REPLACED

Jim Morose, from Danvers, MA was one of our non-voting marshals, all of whom kindly traveled from out of state to ensure a fair count. Jim also took video for Danvers Community Access TV, and sent us the link. Thankyou Jim. For those of you who were unable to be there, here’s a quick review:
END_OF_DOCUMENT_TOKEN_TO_BE_REPLACED 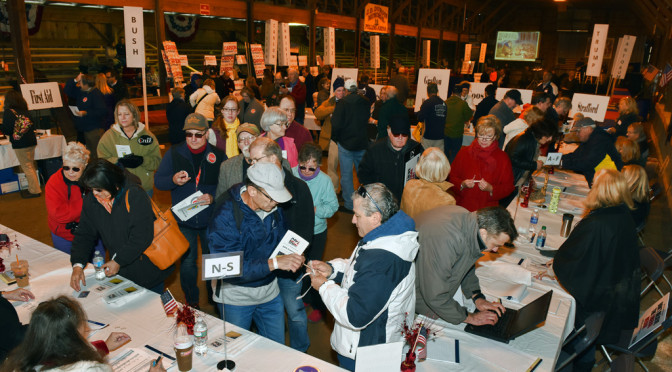 Thanks to all the voters who turned out in barely 40 degree temperatures this Saturday in order to exercise a novel (for NH) method of figuring out which GOP candidate has the broadest appeal to the grassroots.

All candidates were invited, nay, exhorted, to attend, or send representatives, to encourage their supporters, and to send a surrogate speaker or a video clip to make their pitch.

The results reflect a combination of the candidate’s breadth of appeal, and the effort put forth by their campaign – our hats off to Ted Cruz and his team for encouraging the most supporters to attend, and for persuading the majority of the voters freed from early rounds to join their group for the final count.

Photos of the event by Lin Wickett after the jump: END_OF_DOCUMENT_TOKEN_TO_BE_REPLACED